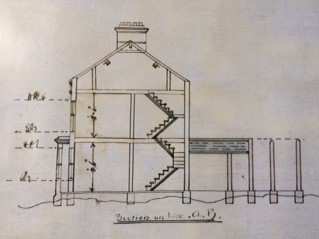 Plus ça change, plus c’est le même chose – in terms of a writer’s routine. Writing does require one to be alone – bum on seat, getting the words on the page – but the lockdown has certainly affected three aspects of my writing practice: the relation between research and writing; between actual and imaginative access to places and, thirdly, collaboration; while a book by one of the directors of this Centre has had a particular influence: Professor Lisa Lewis’s ‘Performing Wales: People, Memory, Place’ (University of Wales Press, 2018).

I have been a non-academic member of the Centre since 2013 and have a project with it on writing in Wales and Northern Ireland. I am a documentary producer. I turned full-time writer in 2017, since when I’ve written a novel, poetry, and a collection of short stories (A City Burning, due from Seren Books on October 21st.)

I received a SIAP (Support for the Individual Artist) award from the Arts Council of Northern Ireland for the period November 2019 to October 2020 to do a piece of writing in prose and poetry. It was predicated on my spending a month living back in the street where I grew up. I am attempting to give an account of a particular area of east Belfast from a perspective that has hardly ever before been represented. In terms of the majority and minority populations of that area, I am from the latter, and from a minority within the minority. As well as writing about my childhood, I have been researching demographic changes in the area over the decades since the late Fifties. I saw my time in situ as an important opportunity to continue my reading of the area. I planned that to start on the 19th March but the lockdown prevented it. I had to return to my house in Ballycastle, in the north-east of Northern Ireland, and take stock.

Being by trade a documentary-maker, facts matter greatly to me, as do personal interviews. I had looked forward to the library- and interview-based research work I had planned for my Belfast month. What could I achieve within the new limitations?

Gradually I recognised that I should stop fretting about whether I had done enough research. Since I have been formally researching this for more than two years and, by one means or another, informally throughout my working life, I should – simply put − get on with it. That might not sound a significant shift, but some will recognise that, for the type of writer who likes to proceed step-by-step, it is a major change. Rather than being hampered by what I do not have, I have freed myself to concentrate on what I do have.

Some of the significance of this step lies in the role of history in my piece of work.  If I seek to offer a reading of events that differs from the prevailing ones, must I not be sure of the facts about those events? (I have in mind the Northern Ireland of the Nineteen Sixties and the early years of the Troubles). Facts matter, but so does the lived experience of them. I am confronting my own credibility as a witness, in circumstances which make it very difficult to check up on facts. What authority do I accord myself?

I have been a kind of journalist for most of my working life, documenting, in long form pieces of work, a wide range of experiences, mostly those of other people. Unlike the news journalist, the documentarian usually has the benefit, and the burden, of lengthy access to the subjects and a more extended time-frame in all respects. Like the news journalist, the documentarian aims to know enough about the topic to be able to recognise the lie, the evasion, the revelation. Am I now a documentarian of my own life? If so, I must keep my eyes open for my own versions of that triad.

I am attempting a type of documentation of place − of houses which were significant in my life up to the age of 13, two in particular – and a consideration of the effects of displacement, particularly in the context of urban sectarian disruption. I have done detailed research into how these houses and their streets were built, and by whom, and who lived in them.

Somewhere in the National Museum of Wales, as it happens, is a builder’s manual from about 1890, specifying to the last pound of nails, all the materials a builder would need to build, in Belfast, one of the very houses I am writing about. I came across the manual in the Eighties when I was making a tv series on the vernacular architecture of Wales. I dream of that manual, sitting on a shelf somewhere in Cardiff, out of reach!

Belfast City Council gave me access to their relevant records two years ago and this enabled me to ‘follow’ my first home back to the field on which it was built. But why does the acquisition of this obscure information matter? And what am I up to, putting all this energy into work that no one is waiting for?

This is where I have been helped by Professor Lisa Lewis’s ‘Performing Wales: People, Memory, Place’ It’s one of the few books I have with me in the lockdown. The first chapter considers Cenedl: people; Cof: memory; Lle: place and their relation to culture and to performance in Wales. I lived in Wales for 39 years, having been born and brought up in Belfast for 24 years prior to that. In my current work I am considering the people of east Belfast, interrogating my memories, of that place.  I am finding the contrasts and similarities between the Welsh and Northern Irish experiences very telling.

No one could engage with Wales for long without noticing the importance of place. I soon encountered the concept of ‘y fro’ and ‘y filltir sgwar ’ (the square mile). The former term encapsulates a complex interpenetration of belonging, area, language and the land itself.

‘In Welsh-language culture the relationship with place is often profoundly embodied and the emplaced body is a recurrent motif, famously so in T.H. Parry’s poem ‘Bro’ (1954), where the poet imagines forward to his own death and, in the process, revisits his childhood home… the poet’s own death reveals itself as a scar on the lake and a crack in the schoolhouse wall… ‘Mae darnau ohonof ar wasgar ar hyd y fro’ (there are pieces of myself scattered across y fro).”

I do not conceive of my death having this result on my ‘home patch’. My separation, my ejection, was too complete and I never felt that I was allowed to be fully emplaced even when living there. And yet, I claim a relationship, nonetheless. But different in kind.

Lisa Lewis surveys some of the leading theorists on place. I have read most of them, as place has been a recurring preoccupation of mine. Unable to go the actual texts, in current circumstances, I am putting greater trust in what may have soaked well in, from that reading; greater trust in what is in my mental reservoir.

Lisa Lewis quotes Bachelard. He “describes our dreams of the house in which we were born as ‘the well-tempered matter of the material paradise... the environment in which the protective beings live,’ and that a house ‘constitutes a body of images that give mankind proofs or illusions of stability’”. (The Poetics of Space Boston, Beacon Press, 1994).

In common with many others during The Troubles in Belfast my family experienced displacement caused by sectarianism. Stability was an illusion, as we had always suspected. Am I re-creating stability by writing about these places from which we were exiled?

Lisa Lewis considers the Welsh philosopher, J. R. Jones, “Perceiving the need to belong to people and place as fundamental aspects of the existential search for meaning, Jones posits that being involves making space for oneself, with others.”

Yes, I thought. In this work I am making space for myself, but, crucially with others. I don’t want to work against those who may be blameable.

One telephone encounter I have had during lockdown was with Alan Abernethy, who witnessed a particularly horrible sectarian incident in my area (which affected me) when we were both fifteen. His book, ‘The Jewel In The Mess’, (Columba Books, 2019) gives an account of it and the powerful impact it had on his whole life, in that it turned him away from violence and towards a search for a Christianity that is inclusive.

I made a tv documentary, referencing this incident (Say Yer Alphabet Wee Doll, HTV Wales, 2008), including film footage of its aftermath, but he is the only ‘witness’ from ‘the other side’ that I have had the chance to talk with in all that time. Contact with him, 46 years after the event, is part of my making space with others.

In her discussion of the role of museums, Lisa Lewis quotes Iorwerth Peate’s phrase about visitors to his folk museum, “crossing ‘the bridge of memories’” in coming to “a personal and somatic experience of the open-air site, in which the visitor participates in a series of negotiations regarding their own particular memories and a more general and collective sense of memory related to the people as a cultural group.”

I am crossing a bridge of memories in this work of mine and trying to interact with other people who are crossing alongside me.

She also asserts that the arrangement of the museum site, “actively encourages the visitor, through the physical act of walking the site and entering houses, to perform a square mile into being.”

Am I attempting to do something similar – write my square mile into being?

Lisa Lewis states that J. R Jones, “articulates a problem of belonging that is based on the need for home and roots as locations in time and place that repel meaninglessness.”

Yes, I thought, when I read that, I am repelling meaninglessness. I am refusing it to give it the last word on my childhood experience of ‘home’.