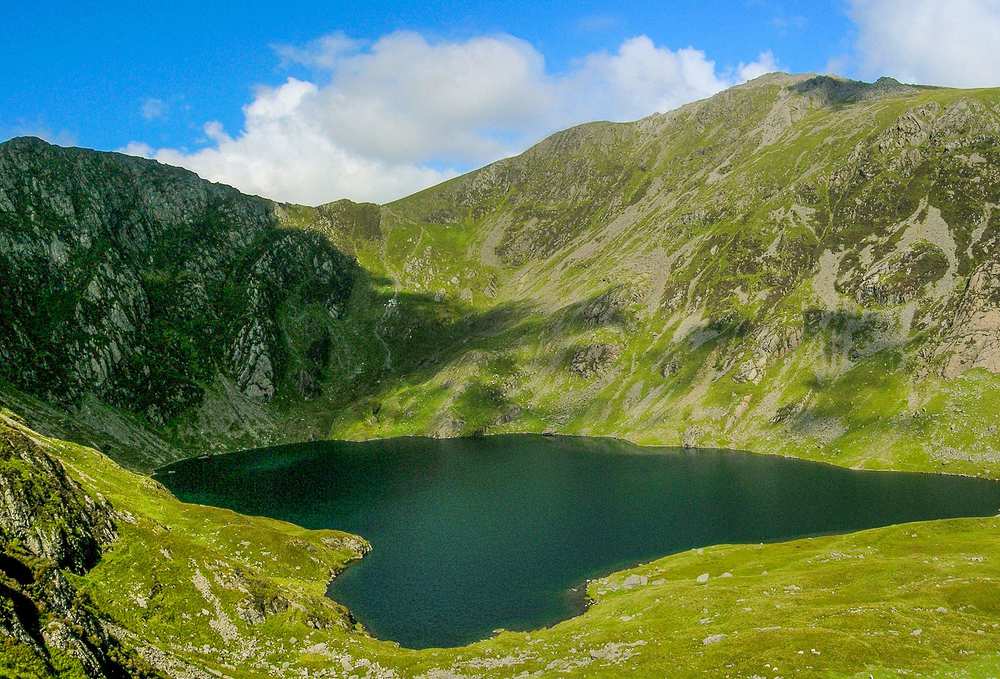 Richard Gough is the General Editor of the journal Performance Research, Professor of Music & Performance in the Faculty of Creative Industries at the University of South Wales, Cardiff, Wales, UK and Artistic Director of the Centre for Performance Research (CPR). He has curated and organized numerous international theatre projects including conferences, summer schools and workshop festivals, and he has produced nationwide tours of experimental theatre and traditional dance/theatre ensembles from around the world.

I write this on 6 July 2020. Lockdown, due to the COVID-19 pandemic, began in Wales 106 days ago. On this 107th day, unlike other parts of the already-relaxed UK, the travel restriction – a ban on travelling more than five miles from home with the advice to ‘Stay Local’ – is being lifted by the Welsh Government. A mist, more like a claggy fog, ascends slowly, the shackles of home and living under house arrest are untied, we can walk freely again, on hills and mountains - to ramble, to wander, to meander wild Wales.

Living in coastal Ceredigion there are no mountains in view. For these past few months, mountains have become ‘out of bound’, forbidden territory, (yet not out of mind) their landscapes consigned to haunting memory and igniting dreams. I wonder what it must have been like to have been living in Llanberis, Brecon, Abergavenny or Dolgellau, to mention but a few towns, literally and geographical, at the foot of some of Wales’s great mountains. Living in their lowlands, and though not free to wander them, to maintain sight of them - for their being to have bearing and for their contours to in-form everyday existence.

Although I am not a brisk daily walker nor an ardent weekend rambler (and certainly no mountaineer), I am a wanderer. Growing up in North Wales (holidays in Anglesey), the mountains of Snowdon, and those of lesser incline, helped form me. And as a youth living in Cardiff, the Brecon Beacons and the Black Mountains were my escape – from the city, for the freedom to meander, to think more expansively, to be be-littled.

Like our iconic sheep, prone to wander, best left to meander in the open expanses of Wales, we too need freedom. ‘Mountain Lambs Taste Sweeter’ proclaims the sign as you drive from Llangurig to Aberystwyth. Germs spread quickly among the flock if kept indoors. Sheep are not made for rearing in stalls or staying at home, the lamb briefly shielded perhaps, born in a barn but bleating to gambol. Not possible to lockdown, not able to isolate, straying from the flock, social distancing is indeed anathema. The sheep, following like … sheep, know each fold of the mountain, watch the Two Legs struggle with navigational gadgets as they fumble orienteering. And what can we do with our compass and map during lockdown? How do we remember the great outdoors and the power the mountains have in our imagining? How do we assert our sense of belonging? Our square mile (y Filltir Sgwar) becomes restrictive, repressive as we must ‘Stay Local’, corralling the imaginary of a nation.

For a mountain – a life measured in thousands of years - this brief few months of respite has been but seconds, and the marauding of humans an event of the last few hours. But the mountains know how the climate feels, how the earth moves, how repair shudders, how healing hurts. Have the mountains enjoyed this lack of human tread, now about to return along their backs: the acupuncture of the mountaineers’ gear; the rhythmic pad of the ramblers’ boots; the irritating tickle of the day trippers’ tackle, ill-prepared in those trendy sneakers, audacious in ascent, disrespectfully mounting. ‘Don’t try me’, Cadair Idris sternly commands. ‘Don’t even think of it’, sneers Snowdon, ‘just catch the train’. ‘Who Dares Wins’, whispers Pen Y Fan but wishes even those over-dressed and combat-attired would refrain from the ‘Fan Dance’ on certain days.

I need to see the mountains again. Let’s depart from RAF Valley (Anglesey) in a Hawk T2[1], the RAF’s premier ‘transonic’ fast-jet trainer. Circling over the Irish Sea we turn back towards Ynys Môn, from this state-of-the-art flying machine we can marvel the evidence of Stone, Iron and Bronze Age encampments all engraved on the mountain of Holyhead - Mynydd Twr - towering above the town and port. From here we can see Ireland, no need to catch the ferry. Gaining speed heading east, we fly over the seemingly barren, ochre pitted, moon-like landscape of Parys Mountain, pock-marked and eviscerated from years of copper mining. Turning south, within minutes over the Menai Straits, we can see Bethesda. Flying between Drosgl and Foel Fras, of the Carneddau range we pass by the first of many mountaintop burial chambers and the first of the Welsh 3000s ‘summitting challenge’ peaks.

Heading east towards Liverpool, the seaside towns along Conwy Bay (my hometown amongst them) scuttle by. Veering left at Moel Famau (‘Mama’, mother mountain) flying south along Offa’s Dyke, we are briefly in England, then, back into Wales. Almost at the speed of sound now we sweep through Moel Seisiog and Moel Fanau, glimpsing Llangollen and echoes of folk song, past Moel Fferna and Foel Wen, our jet skimming the waters of Lake Lake Vyrnwy, the sounds buffering Tir Rhiwlog. Turning east towards Beacon Hill, we are slithering at breakneck speed down Wales, along Offa’s trail. We pass Lord Herefords Knob (Twmpa) and rise steeply to Hay Bluff (Penybegwn) sensing what could be a mountain of books, laid flat along shelves and the streets of Hay on Wye. The dark shadows of eroded peat of Waun Fach and Pen y Gadair Fawr absorbing our fly by signature, stalking the landscapes that sharpened the senses of Raymond Williams. Soon the The Skirrid appears, trembling, shattered alone (Ysgyryd Fawr) left behind by its parent range, the Black Mountains, we circle sharply and head for the Sugar Loaf, this extinct volcano appearing as if a Japanese vista, but no half-revealing mist today.

And soon Garn Caws and then Pen Y Fan are beneath us. Now in the Brecon Beacons, following briefly the flight path from Heathrow to New York, we re-enter the western Black Mountains, Fan Fawr and Fan Gyhirych,[2] the wild expanse of these ridges in stark contrast to the valleys below and the industrial scars that stretch from Merthyr to Cardiff. Soon at Crymych we follow the ‘Golden Road’ that cuts the top of these ‘blue’ mountains of Preseli and the words of Waldo Williams can be heard even at this height: ‘Dyma’r mynyddoedd. Ni fedr ond un iaith eu codi/ A’u rhoi yn eu rhyddid yn erbyn wybren cân’ ‘Here are the mountains. Only one language can raise them/ And set them in all their freedom against a sky of song.’

And now we follow the song-lines along the Cambrian Mountains turning right at Pumlumon Fawr, flying over the Dyfi estuary, past Eglwys-fach (thinking of R S Thomas who knew too well the feeling of isolation and the Welsh landscape, bitterly writing about rural life, language, memory and mountains). We see now, above Tarren Hendre, the magnificent glacial peak of Cadair Idris, the seat of Giant Idris and next to Penygader the summit lake - Llyn Cau shimmering in splendid solitude. And then down the far side of Cadair, now as if on a freewheeling roller coaster, seemingly defying gravity - am I still in a blue emblazoned Hawk or have I become Red Kite, soaring on the rising air currents? In minutes circling the mountains above Barmouth, behind Harlech, Diffwys, Y Llethr, Rhiniog Fawr all aligned towards Moel Ysgfarnogod , we see the tracks of Robert Graves in a rambling reverie stirring Greek myths with Welsh legend. Over Penrhyndeudraeth, and then the mighty summits appear, spilling over each other in quick succession, Moelwyn Mawr, Cnicht, Yr Aran and then Yr Wyddfa (Snowdon) itself, the site of rehearsal for the ascent of Everest, where Edmund Hilary, accompanied by Tenzing Norgay and the entire team, trained for the Everest Expedition. Now circling around Glyder Fawr (only a few hundred feet lower than Snowdon) heading west over Mynydd Mawr and then the three summits of Yr Eifl on the Llŷn Peninsula, a loop around Bardsey Island, then north, returning to Rhosneigr and the sea-level-sterile-safety of the stratified airfield – to land safely from the sky.

This thousand-kilometre panoramic fair-ground ride around Wales took less than an hour but for me to know these mountains, to walk, to feel and respect them through feet and mind has taken a lifetime. Two years ago, at the Performing Mountains Conference in Leeds I presented a paper entitled (Re)Lying on Mountains. I reflected on a specific moment from my childhood, a memory of being atop Moel Famau. I was describing (inventing) events and landscapes of Wales from the perspective of the summit and I took this as a starting point to consider the performance of mountains within the cultures of Wales: in the memory and the imaginary of a nation; how the mountains themselves perform; what we allow them to ‘do’.  I considered mountains as sleeping giants (soon to awake) and as places to sleep through the night (as hermit or wanderer) and be guided by visions; to turn poet or go insane. Mountains performing as portals to the underworld, as sites of veneration and transformation, as tourist destination for recreational achievement, and as military training ground for exertion.

Two excerpts from this text will form future Blog entries.

[1] The choice of RAF Valley as a departure point for this airborne survey is deliberately controversial. See:

[2] I have flown south of the Epynt mountain and avoided any ‘conflict’ with the Ministry of Defence. Although the 80th anniversary of the MoD ‘clearance’ of this mountain (and its people) was marked only a few days earlier - in June 2020. See:

And Lisa Lewis alerted me to this:

There have a been a range of programmes on remembering Epynt on S4C and BBC Radio Wales and especially Radio Beca, which has dramatised 'Y Mynydd a Ddiflanwyd' ('the mountain that was disappeared'). Desolation Radio has also broadcast a programme in English on this -