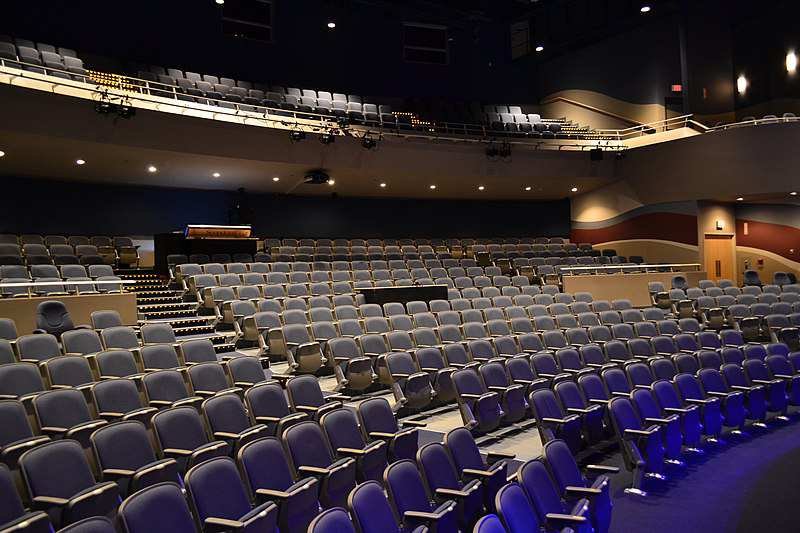 Ghostlights are everywhere. The tradition of leaving one light on, part theatre superstition - part health and safety measure, ensuring that a theatre space never ‘goes dark’, is being seen in posts all over the twittersphere. While our theatres close, and the communal act of coming together to witness together is being taken away, some theatres are increasingly using other means of bringing people together.

It’s difficult to write a blog on the effects of the Covid-19 virus on Welsh theatres. It hurts, with theatres closed and the physical community dispersed. Theatre is essentially a collective venture, and one that sustains a sense of communion. But the most direct effects are the losses to the freelance workforce who sustain the collective act night after night. Theatr Genedlaethol Cymru has had to cut short it’s tour of Tylwyth by Daf James, and cancel the long-awaited tour Pryd Mae’r Haf? (a project with Criw Brwd, Theatr Soar and The Other Room). Jon Tregenna’s Hail Cremation! for National Theatre Wales has been cancelled; Chwarae by Theatr Iolo was pulled half way through its tour; Bara Caws has had to cancel Draenen Ddu (the first Welsh language production of  Charley Miles’s award-winning Blackthorn); Theatr Clwyd’s tour of Milky Peaks by Seiriol Davies has been cancelled. Since the closure of all theatres on 20th March, and as the scale of the loss to the freelance community becomes clear there has been increasing pressure on the Chancellor by industry unions BECTU and Equity, to review his financial plans to safeguard the creative industries freelance sector. Without support of this kind a large proportion of the freelance workforce could face bankruptcy within a year. There has been a strong response from the industry; renowned actors have signed the petition to defend creative industries workers, and by the 24th of March BECTU was encouraging theatres to take advantage of the British Government’s offer of payment of 80% of staff salaries.

Like many in the sector, we are awaiting eagerly the Chancellor’s announcement of support for the freelance workforce. I wonder whether it will be in any way similar to that organised by the Berlin Senate - €100 million in grants of €5,000 to freelance workers and small businesses in the cultural sector, amongst several other plans. In Wales, the Arts Council of Wales will honour grants to projects and ask that companies do the same, irrespective of whether the production is cancelled or postponed, which will hopefully see many get paid for projects that have begun or about to begin.

But the greatest fear, is facing what is to happen afterwards, in a world of work that is perpetually uncertain and difficult in terms of establishing regular employment. It’s difficult to imagine centres that are so central to their communities with their doors closed. I can hardly imagine Chapter in Cardiff or Arad Goch in Aberystwyth empty for any duration – the loss is enormous. Many centres operating as charities will need their audience’s support in order to survive. The crisis means that theatres are facing an existential threat which forces us all to think in new ways about how they operate. Many are responding in creative and rapid ways. Several companies, such as Hijinx, are thinking of new ways to continue over the next period, and theatr na nÓg have placed all their learning materials online and free for all. The most crucial aspect of theatre, however, attending a shared space in order to experience a kind of communion that is unique, will have to wait for the time being. Even so, there are efforts afoot to replicate the live experience in various virtual ways. The Sherman has announced their Egwyl programme, which provides opportunities to develop people’s work remotely via several innovative schemes including online talks with Sherman staff; the commisioning of 5 minute monologue performances by Welsh authors on Youtube, following the plans set forth by Papatango in Isolated but Open, Voices from Across The Shutdown; giving sproadic online profiles to freelancers; and the creation of digital resources in order to continue engagement with young people.  Frân Wen has been holding live online workshops with young people called #cymanfaFW, which streams live on their Youtube channel and the ‘Am bob Dim’ App; and their Hirael sessions for older people  are held by phone. Theatr Clwyd have prepared creative packs and food for vulnerable members in collaboration with social services and the Housing Association. Through the Arts from the Armchair project with Betsi Cadwaladr Health Board they also prepare creative activities for those who live with dementia, and since those who are vulnerable must self-isolate, project members are now making and distributing creative packs to the most vulnerable. Such plans to support their communities and to support new artists are aspects of our theatres’ work that is perhaps more hidden to the majority of their audiences.

Further afield, National Theatre Scotland has responded quickly with substantial online programmes. The Scenes for Survival season, a collaboration with BBC Scotland and the BBC Arts Culture in Quarantine programme, will provide short digital plays performed by renowned actors and well-known dramatists, available free online. Alongside this there will be an opportunity for other dramatists to get comissioned to create short new pieces and for established dramatists to pay their fee forward to the newcomers or those less well known. This is all done in partnership with many theatre companies in Scotland who have had to close.

In England the HOME arts centre in Manchester are comissioning Homemakers, a new programme of theatre and live art works by artists in their homes and into the audiences’ homes. This is done, they say, in order to challenge definitions of ‘live theatre’ – either by live streaming; through screening recorded performances; through games and interactive stories; or personal encounters online. All will be available on their website on a ‘pay-what-you-decide’ basis. It is funded by the generous donations gvien to the HOME Response Fund, less than a week after announcing its existence and closing the centre’s doors. Unmistakeable evidence of the way in which the community values this centre. The fund is to be split between the Centre and the artists themselves in order to invest in the future of the site and the freelance workers who use it.

There has also been a response and from highly experiences practitioners, warning against a kind of Darwinian urge to compete to be the most digitally innovative, and to desist from trying to re-invent the wheel overnight.  This stems from the inevitable immediacy of theatre as live art, the desire to connect, and the need to rightly consider the future of our theatre industry. And so far, the majority of productions placed online are recordings rather than live performances – see this Guardian article. Centre member Christina Papagiannouli has written extensively on cyberperformance – live online performance – in Political Cyberperformance (Palgrave Macmillan, 2016), and describes the movement towards online communities and what this can mean for a particiaptory, interactive and engaging theatre. For Papagiannouli the political possibilities of the medium are abundantly present. And this is worth considering in the context of how theatre responds to the present crisis and as an active and social art form valued by its audiences.

At this time, with the television industry also on hold, it’s difficult to predict long term effects on the sector. One thing is certain, on the cusp of World Theatre Day (27 March 2020) we must consider and plan how the theatre community is to quite literally survive.

ANNOUNCING THE RECIPIENTS OF THE CEANGAL | CWLWM III COMMISSION AWARD