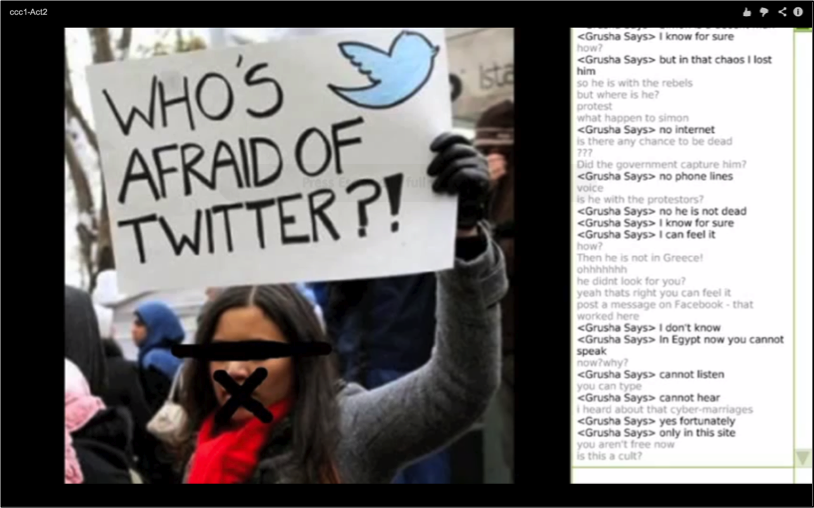 What are theatres doing online?

With more than a fifth of the world's population been under lockdown, theatre makers and educators, either by choice or force, have turned towards the internet to communicate with their audiences and students. Although the main norm seems to be streaming pre-recorded performances via the Internet, with goliaths of UK and European theatre closing the one after the other their physical buildings and opening their online performance archives for free to the public (a norm that has been met with criticism by theatre circles questioning what such a movement holds for the future of theatre), there is still a huge interest in real-time performance by individual artists, educators and students.

‘The Show Must Go Online’ (2020), for instance, presents on YouTube Live weekly readings of the complete plays of Shakespeare by a global cast via Zoom videoconferencing application in response to the global COVID-19 pandemic. Geographically distributed performers collaborate, rehearse and perform live on Zoom, while audiences watch the performance on YouTube Live interacting with one-another via a chat-box. Additionally, Robert Myles leads interval and post-show discussions with performers and audiences, where the latter type their comments and questions on the chat-box.

The National Theatre of Scotland has announced an alternative theatrical online programme to support the Scottish theatre sector and creatives during the current critical situation. Scenes for Survival will present short digital artworks in a series of online platforms and channels over the next few months. The season of works will also act as a platform to raise money for a new hardship fund for artists and those in the theatre industry who have been hardest hit financially.

In principle, I disagree with conservative opinions seeing pre-recorded performances’ streaming as ‘enemies’, fearing that they will replace or damage theatre and its audiences. It will probably create and attract new types of audiences similarly to NTLive’s broadcasts in cinemas, but it won’t replace theatre, as we know it. However, I agree in practice. Online theatre and performance is not just about streaming theatre online. Online theatre is about building a sense of co-presence and co-existence in real time for remote audiences: ‘the notion of liveness in cyberformance is directly connected to the interactive and participative character of the Internet, as without real-time engagement the notion of co-presence is weak and, thus, liveness is meaningless’ (Papagiannouli, 2016:10).

How can we make theatre online?

Since 1997, Adriene Jenik and Lisa Brenneis experimented with chat and game spaces to create live, immersive and often unexpected live performances. Their first Desktop Theater (Palace) production was an adaptation and performance of Samuel Beckett's "Waiting for Godot" in the Palace virtual chat environment. Waitingforgodot.com is known as possibly ‘the only performance of Beckett’s Waiting for Godot where Godot has actually arrived’ (Jamieson 2008: 26) when a chat room participant changed his/her avatar’s name to Godot and announced that he had arrived [see Papagiannouli, 2018].

You are Invited (Imploding Fictions, 2011) is an example of remote collaboration via Skype. In 2010, Paul Osuch, founder and artistic director of the Anywhere Theatre Festival, invited the Imploding Fictions, a Norway- based theatre company founded by Philip Thorne and Øystein Ulsberg Brager, to participate in the festival in Brisbane, Australia (Brager, 2012). However, owing to a lack of funds, the company decided to collaborate with colleagues spread across the globe and devise a performance using Skype as a theatrical stage. You Are Invited consisted of five mini-shows performed from five different countries/places: Norway, United States (Texas), Spain, Germany and England for one-to-one online audience. [see Papagiannouli, 2016:55]

Biologist and performance artist Annie Abrahams collaborated with up to 24 women of different nationalities, whom she met through the Internet, without any personal or direct connection, and whose work was related to contemporary art practices and computer-based performances, for her Angry Women (Annie Abrahams, 2011-) webcam performance. All artists sat in front of their own computer in their own country during the performance. They were asked to talk about their anger in their mother tongue. The aim of the project was to reveal moments that human beings cannot control them- selves and to perform those (emotional) moments that people usually prefer not to show. [see Papagiannouli, 2016:33-34]

The internationally known theatre company Rimini Protokoll used existing established technology that had made India ‘become the back office of the western world’ (Haug, 2012) for their Call Cutta in a Box (Rimini Protokoll, 2008-13) production. The Internet featured here as a vital tool for socio- political criticism and for arousing audience sensitivity on the topic of call centres are intercultural communication hubs. Call Cutta in a Box discussed the notion of distance and proximity in such types of sound communications, by creating the opportunity to see/meet the person behind the voice at either end of the line. [see Papagiannouli, 2016:32-33]

For the production of Life Streaming (Dries Verhoeven, 2010), Dries Verhoeven installed antennas in Sri Lanka – the country has no ‘fast’ Internet as the Western world is used to – to connect distant people to share experiences. The project, performed as part of the 2010 LIFT, was a one-to-one, online performance experience. Each member of the audience in London ‘chatted’ with a member of the troupe located on a beach 8,000 kilometres away, through an application similar to Skype. Breaking geographical, technical and cultural barriers, Life Streaming commented on the media presentation of individuals as passive victims, focusing on the case of the 2004 tsunami in Indonesia. [see Papagiannouli, 2016:30-31]

In Phone Home (Upstart Theatre, 2015), three theatre companies in three European cities (Athens, Munich, London) created a theatre performance, produced simultaneously on three theatre stages, with the audience in each city watching a part of each story. The stories were then completed with the scenes interconnecting live and the actors on each stage communicating via the internet (Skype).

An example of cyber-street theatre is ‘Mertonian Chatroulette’ (Merton and Ben Folds, 2010). Merton is an improvisation piano player who gained media attention during 2010 for his YouTube videos of music interactions with random people he met on Chatroulette. His solo performances surprised the random interlocutors, who became audience members for his one-to-one live improvisations and performers for his recorded videos on YouTube. Ben Folds, in turn, developed Merton’s technique on stage, with offline audiences observing and actively reacting in the live composition of Folds’ improvisational songs. A combination of indoor and outdoor theatre was created, where offline audience members became performers for online ones and online participants performed for offline audiences. [see Papagiannouli, 2016:57-58]

During the 2013 SPILL Festival of Performance, Forced Entertainment webcasted live for free their sold-out 24-hour version of their Quizoola! production from the Barbican Centre. Quizoola! 24 (Forced Entertainment, 2013) reached 4,541 online views between 11:59 p.m. on 12 April and 11:59 p.m. on 13 April on three different websites: Barbican, SPILL Festival and Forced Entertainment. In addition, the webcast links allowed the audience to follow the tweets of other audience members, enriching the live experience of the online audience, who could read posts of offline and online spectators and communicate with each other. Even though the performers did not interact with the audience in real time, the online audience felt extremely engaged with the show because of the sense of audience co-presence on Twitter. [see Papagiannouli, 2016:12]

The Royal Shakespeare Company has started experimenting with digital technology since 2010 with the Twitter adaptation of Romeo and Juliet, Such Tweet Sorrow (RSC, 2010). Six actors, coached and directed by Roxana Silbert, improvised the dialogue of the central characters for Such Tweet Sorrow, following the framework of an overall scripted grid that plotted the action of each character. Bethan Marlow and Tim Wright wrote daily missions for each actor, who could then ‘act’ from wherever they could get online. The missions were delivered each morning, telling the actors how the story would evolve that day, and the actors had to improvise and decide what to say by posting tweets of up to 140 characters. Nearly 6,000 people followed Juliet, and an average of 4,000 audience members followed and interacted with the other characters through real-time hypertext updates and tweets, including videos, pictures, web pages and text logs. [see Papagiannouli, 2016:37]

Based on a diary kept by Eva Heyman in 1944, Eva.stories (Maya & Mati Kochavi, 2019-20) is a Holocaust story for the Social Media Generation on Instagram. Although the project was created as an Instagram movie, it is a good example of how a social media platform can serve as a stage for digital storytelling and character building purposes.

These are just few examples of how we can make theatre online. In principle, any online platform that allows real-time interaction and participation can serve as a virtual stage for online theatre and performance; ‘their theatrical uses share a common raison d’être: direct, real-time communication between theatre and its remote, geographically distant audience’ (Papagiannouli, 2016:3).

In 2011, I directed ‘Cyberian Chalk Circle’, my first cyberformance as part of the Etheatre Project (2010-14), a practice-based PhD on directing political online theatre. Cyberian Chalk Circle, performed on 14 May and 11 November 2011 on UpStage and on 3 November 2012 on Waterwheel Tap by Evi Stamatiou (with the contribution of Prodromos Tsinikoris), was an online, interactive, chat-based adaptation of Brecht’s The Caucasian Chalk Circle (1944). Ten years later, and with COVID-19 ‘infecting’ our lives and theatre, here are the two key lessons I learned from my experience with online performance:

(1)   Co-create ‘with’ the online platform, by exploring its features. Online platforms, apart from providing virtual stages, they also offer a range of tools, including streaming options, chat-boxes, screen sharing, emoticons, background changes, as well as linking different accounts and capturing audiences reactions. On Instagram, for instance, you can live stream and invite your followers to join the stream and have a conversation.

(2)   Be playful and open to audience interactions and offers. Often online performance is more fun for the people creating it than for its audiences. Embrace the audience in the making and staging of online theatre, by allowing them to interact, communicate, challenge and creatively disturb the performance.