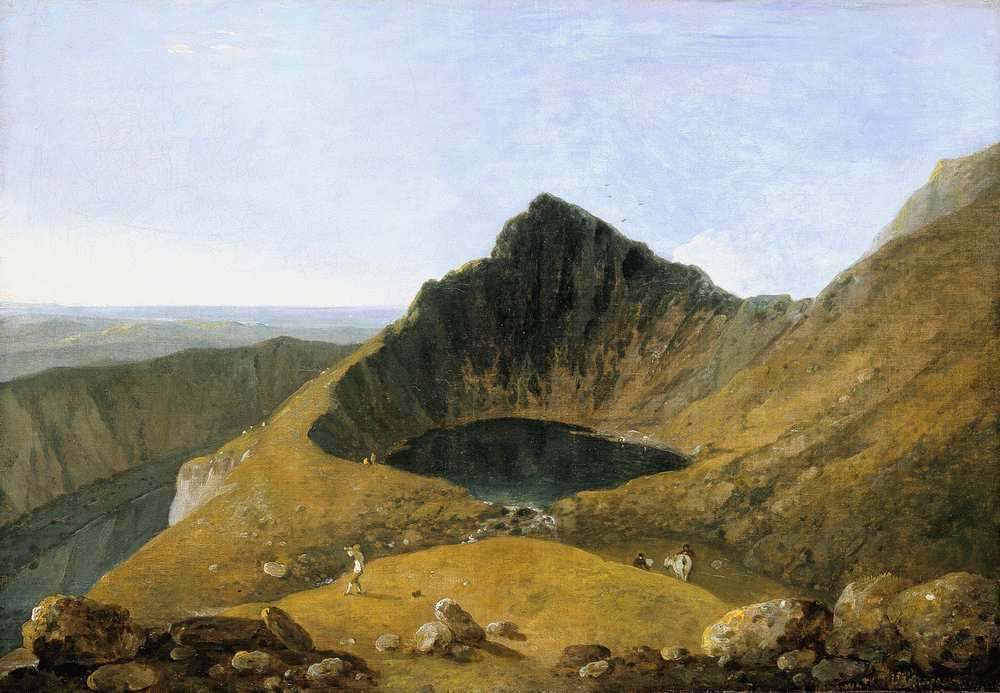 Richard Gough is Professor of Music & Performance in the Faculty of Creative Industries at the University of South Wales.

As mentioned at the end of last week’s Blog entry, two years ago at the Performing Mountains Conference in Leeds I presented a paper entitled (Re)Lying on Mountains; this is an edit of the introductory section of that paper.

We could be seen from the centre of Liverpool, or so we thought, that day. We felt strong and significant from where we stood, (we thought John, Paul, George or even Ringo might just see us - if only they looked up); Liverpool was the most famous place we knew.

We had seen this place from the centre of Liverpool, on one of the all too infrequent trips for Christmas shopping, or the time Peter’s aunty took us to see Ken Dodd and the Diddymen. On a crisp, clear Winter’s day gazing back from where we had come, the flat vista across Chester into Wales and the Clwydian mountain range; there it was: Moel Famau (literally Mother Mountain) and what a mother (if only a ‘hill’), a single majestic breast with a prominent nipple, and there we stood, that day, right upon the highest point of what for us was a magnificent teat – our local mountain, ours alone, midday, midweek; marauders from Merseyside would inveigle and maul it at weekends, don’t go there, then, our mothers would insist. But today Peter’s mother had driven us to Loggerheads (even for an eleven-year-old, seeming a curious name for a village and not far from Sodom, close to Mold) and we had walked the rest, following the much-rambled trail of Offa’s Dyke. At the top we clambered up the ruin and then the whole of North Wales opened before us, a 360 degrees cyclorama. ‘On a clear day you can see for miles’, how many times had we heard that, but what if seeing is not only believing but a license to invent, to mischievously reconstruct the panoramas that unveil themselves before one.

What is it about being on top of a mountain that at once belittles us and empowers us – that puts all in perspective, collapses distance, distorts time, makes land-scape, permits escape, dilates our fragility and futility, that reminds us of our insignificance, in awe and wonderment, that flattens the ego, reduces anxiety yet enhances aspiration, of being human within geological time. What is more it enflames the imagination, ignites speculation, opens vistas inside the mind through reflection on panoramas beyond human scale. To look down upon the world not with derision but in astonishment and wonder …. as if gods with super-vision but in reality, more akin to ants on the edge of the world, aware of one’s minuteness, fleeting, ephemeral… rendered ineffable…

As we sat on the ruins of the Jubilee Tower, a bizarre obelisk (Egyptian-style), built to commemorate the Golden Jubilee of George 3rd in 1810 (that collapsed in a storm in 1860), we looked westward to Snowdon across to Llandudno and the Great Orme and then north to our home town of Prestatyn, ‘Come to Sunny Prestatyn’ as Philip Larkin had only recently written. We knew Larkin’s Titch Thomas and his cock and balls graffiti. We looked now amongst the stones, the rubble of monument upon mound, seeking a ‘waz ere’ signature. We were about to leave and then we saw, driving up the Offa’s Dyke path a red Range Rover bouncing and lurching towards us. Out jumped someone we recognised: Charles, ‘Prince of Wales’. Flanked by two companions.

At this point in time, July 1967, Charles was 18 having only recently left Gordonstoun School, which he described as ‘Colditz in Kilts’, Peter and I were 11 having just finished at Meliden Primary School hidden now from our view, at this vantage point by Gwaenysgor, but still very much in our minds – a summer rite of passage. He strides across to us and asks, affably, numerous questions about the landscape spread before us. As we were to discover he was on a mission, to learn about Wales; this a reconnaissance in preparation for his investiture in Caernarfon two years hence. We answered enthusiastically, like any good colonial informants, eager to assist, keen to please, to apply our local knowledge, to share with magisterial authority; inventing answers, embellishing facts, elaborating myth and folklore with schoolboy certainty. In the last months at Meliden we had learnt about Boadicea, now we pointed to Boadicea’s grave (unlikely), to the traces of Offa’s Dyke that meandered forward to Prestatyn “Would Sir like to visit Sunny Prestatyn” Peter cautiously asked; these trace lines of Offa were inconsistent but the Prince seemed impressed (and was perhaps more mindful of borders and boundaries than most). Thinking that political history might be a good subject to discuss from mountain tops, we pointed towards Gladstone’s former residence (the most truthful element of our lofty survey) and then to sites and scars in the landscape and way out at the horizon that were garnered from readings of the Mabinogion (total fantasy). There seemed no limits to our interpretation of the lands that lay before us. No doubt this filled his mind with a mix of local knowledge, fabulous fantasy and misinformation. I have often wondered what he made of this encounter upon Moel Famau – amidst the ruins of a monument constructed for his ancestor (Mad King George); Prince, yet not-yet-fully ‘Prince of Wales’, enthusiastically encouraging the performance of two local kids, inventing, reinventing Wales, interweaving fact and fiction, on a clear day, when we could see for miles, and when all landmarks within such vistas could be re-imagined, re-staged and regaled.

Let us freeze this moment of active citizenship; two young fools improvising informants, misguides, myth scribes, interpreters of landscape and history, playing with a Prince gazing at his ‘principality’, stood on the ruins of monumental stupidity. And like a kite soar upwards to look down; the minute profiles of this motley crew fades, they become insignificant, part of the rock, imperceptible and the wind drifts westward and we glide toward Yr Wyddfa (Snowdon): a mountain that helps form a nation, not only one from which land and seascapes can be viewed and described, but one which gives identity to the very country, which performs in the imaginings of its people and their culture; through song and poetry, through myth and legend but also through geology, in rock, through time and space across epochs and era between generations and formations. Snowdon, Wales’ highest mountain, Snowdon from the Old English Snaw Dan (Snow Hill) but Yr Wyddfa in Welsh, meaning tumulus, the burial place of giant Rhita Gawr. And so, we encounter a recurrent theme in mountain mythologies of Wales (and many other countries/cultures); mountains as burial mounds, as sites of passage, the performance remains of creatures great and small – giants and fairies, dragons and their lairs – fallen, felled, asleep in slumber… resting. Landscape as evidence of other worldliness; as folds in the skin of another kind.

Snowdon the great giant that allows a train to ride its back, transporting thousands of tourists each year to the summit, obviating the need of exertion; enabling reverie on landscape, shock and awe. Vistas that transgress everyday perception, that literally alter consciousness. A return to home easily possible, on rail and rack, after witnessing a performance at altitude of light and landscape, with no staging necessary, nature asserting its own dramaturgy.

‘Mountains are the beginning and the end of all natural scenery’ wrote John Ruskin, an enthusiastic admirer of Richard Wilson, arguably the most influential Welsh artist who inspired Constable and Turner. In a sense Richard Wilson could be credited as the father of British landscape painting and the mountains of Snowdonia were his subject. Wilson fundamentally changed the way British and European artists (and their audiences) approached landscape and perceived mountains. A young Turner would trek across rugged hills and mountains to find the precise spots Wilson had painted so that he could replicate the dramatic work. The theatricality of these works is obvious and the placement of figures within such magnificent backdrops dramaturgically informed (houses, once centre stage, were now pushed to one side, placed off-side), the mountains perform and the weather, sunlight and shade, overcast, sombre and resplendent, generates dramatic moods. Richard Wilson was a genius and Snowdon his muse but sadly his work has largely been forgotten.

And Wilson also painted Cadair Idris another of Wales’ iconic mountains at the southern gate of Snowdonia overshadowing the robust and handsome village of Dolgellau. Idris another giant whose seat this is. Idris who felt pieces of grit inside his shoes and once removed cast down the mountainside, settling as the three large boulders at the foot of the mountain. Once again mountains are the rocks, the building stones of myth and legend. Alive in the imaginings of Celtic nations.

Come Fairies, take me out of this dull world, for I would ride with you upon the wind and dance upon the mountains like a flame! (W B Yeats, The Land of Heart’s Desire)