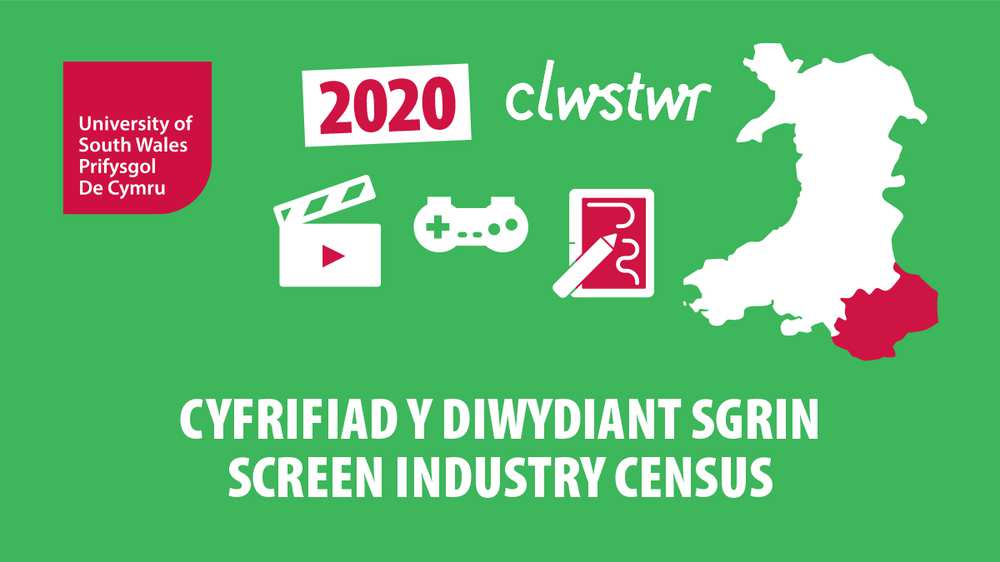 The University of South Wales, working with Clwstwr partners, is delighted to be embarking on the first full census of screen industries production and training provision in the Cardiff Capital Region (CCR). This research is focused upon Film, High End TV, Television, Games, Animation, VFX and Post-Production.

Industry in Wales have highlighted the importance of developing this sectoral data for some time, not least in evidence given by the sector as part of the  National Assembly for Wales’ Inquiry into Film and Major Television Production in Wales (2019). The research will produce detailed data on industry demographics and skills with a focus on growth and innovation.

In order to capture a complete picture, two surveys will be released simultaneously. The first is aimed at screen industries post-16 training provision; the second is geared to the production sector to map organisations and freelance workers. These surveys will be open for responses from 1st June -1st July 2020.

Data collected through the Screen Industry Census 2020 will map the size and shape of the screen industries, initially in the geographical area of CCR. The Screen Census report will be published in Autumn 2020. The Census will offer for the first time, a comprehensive overview and benchmark of who exists. The research is being conducted by the Centre for the Study of Media and Culture in Small Nations at USW. Faye Hannah, Research Fellow at the University of South Wales says:

‘I’m delighted to be working for USW to deliver the Screen Census 2020 research. There has been a significant lack of mapping of screen organisations and training provision in Wales. This has grown ever more important as the screen industry has grown exponentially across the last ten years. This research will identify skills gaps that will importantly lead to support development of further innovation and growth within this priority sector.’

Professor Ruth McElroy adds ‘Now, more than ever this is a time of great challenge for the Screen Sector in the Cardiff Capital Region. Developing this data within Wales, is evidently important to future proof growth and identify opportunities to innovate with and for industry workforce in Wales.’

Industry organisations, freelance individuals and training organisations will be contacted and invited to participate as well as this survey being open publicly for respondents. If you work in, or train the screen sector in the Cardiff Capital Region, now is the time to be counted.

For more information and if you wish to register your interest to be involved please contact:

i.         The Cardiff Capital Region incorporates the following 10 counties in Wales:

ii.         The Screen Production Sector in the CCR region, for the purpose of this research constitutes the sectors of:

‘Coming to a Cinema Near You’: the future of film exhibition

Public service broadcasters: interventions and innovations for the creative economy?

Covid19 and the Creative Sector: How can screen agencies respond?