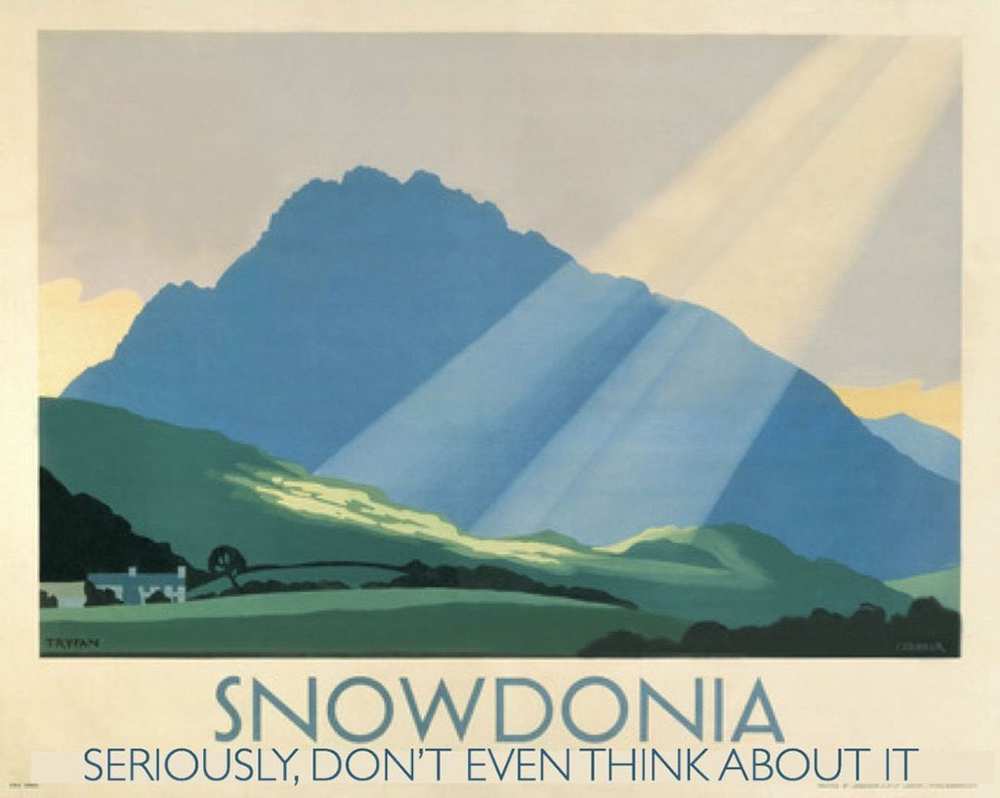 One of the most divisive issues during the period of the lockdown necessitated in the UK by the Covid-19 pandemic surrounds how people use outdoor spaces, especially with regards to visits to tourist hotspots. In the weekend before the UK-wide lockdown was introduced, photos circulated on social media that depicted lengthy queues of traffic waiting to access popular sites in Wales including Snowdonia and long lines of walkers attempting to traverse its paths. In response, a range of images advising potential tourists to stay at home began to appear on sites such as Twitter and Facebook, humorously suggesting that Wales was closed to visitors but that they were welcome to return once the need to stay at home was relaxed. Even the official Visit Wales website has been updated to bear the message “Visit Wales. Later”.

As the lockdown reduces at different stages across the four nations of the UK, tensions have re-emerged, especially for those living on the border between between England and Wales. Such clashes begin to demonstrate the implications of the Covid-19 pandemic on tourism and places, but also speak to the ways in which tourists and, in some cases, more dedicated visitors or fans negotiate their relationships with important sites during the coronavirus.

Previous blogs from the Centre for Small Nations have focused on the pandemic’s impact on public service broadcasting, cinema exhibition, theatre and beyond. The latter clearly have specific relationships with spaces and places which are being reconfigured though online screenings of stage shows and musicals, and the unprecedented transfer of cinematic releases to streaming platforms.

It is against these backdrops that we must understand the disruption to the tourism industry as a result of the coronavirus; according to some reports it is the industry that is likely to suffer the most across Europe and the four nations of the United Kingdom. Visit Britain has already called for sustained government support for the sector, and set out its early recommendations to ensure the recovery of the tourism industry across the country. Further concerns have been reported in Northern Ireland, Scotland, and Wales, where 96% of businesses in the tourism sector have reported concerns about the negative impact of the pandemic. Such threats are especially concerning in small nations where tourism is often an integral part of the economic success of the country. Indeed, the Welcome to Wales: Priorities for the Visitor Economy report, released in January 2020 details the overwhelming importance of tourism to the country with £2.258bn spent by overnight visitors in Wales in 2018, and those employed in the tourism industry accounting for 9.5% of the workforce.

The wider impact of the coronavirus outbreak on the creative industries in small nations also has a bearing here given the close relationship between the screen industries and the tourist sector through media tourism. Visit Britain has recognised the impact of film and TV locations as a key driver of tourism, and work continues through initiatives such as the AHRC-funded Clwstwr project’s support of initiatives such as Reel Reality that seeks to encourage audience engagement with media sites and to map film and TV locations within the South Wales area. Indeed, as Small Nations Centre members Ruth McElroy and Caitriona Noonan  observe in their book Producing British Television Drama: Local Production in a Global Era, all four nations have capitalised on screen tourism to boost local economies and the visibility of locations to national and international producers. If the creative industries suffer as a result of Covid-19 so, too, will much of the tourist infrastructure that relies upon them.

Recognising these challenges, many tourist sites across the UK nations have adapted to  circumstances, utilising social and digital platforms to maintain visitor awareness and to promote their locations. But it is clear that, if tourists cannot physically make visits, then no amount of live streaming of the picturesque scenery will help the often-precarious economies in tourist hotspots.

What, then, do people do when they cannot physically visit favourite places, or experience the pleasures associated with being there in person? As the Coronavirus lockdown has shown us, there are many commonalities between dedicated visitors to live venues, cinemas, and favourite tourist sites. For some, attempts to recreate the experience of ‘being there’ are key. Writing about live streamed gigs, fan studies scholar Valerie Gritsch argues that the concept of ‘communitas’ – an anthropological idea that means feeling united and connected – is a core element of being in a live audience. ‘Attending’ events virtually can generate similar feelings as travelling to important spaces or venues; as Gritsch notes, this enables us to share our experiences watching livestreams with fellow fans and to engage in what she calls “symbolic performances.”’

But, although live streams, screenings and collective re-watchings of favourite media texts may assuage some anxieties, why do the losses of specific places and spaces – whether theatres, concert halls, football grounds, or even theme parks – feel so overwhelming for those who frequent them? For many fans, such places offer a sense of comfort, a feeling of safety and security, even if those places are physically and geographically very distant from where they might live; we can argue, for example, that participating in fandom is similar to the sense of emotional connection we have to the places we think of as ‘home’. These intimate connections mean that when our sense of security and reassurance – the assumption that these places will always be there to be returned to – is threatened, we need time to readjust and react, an issue I have explored in my own research on the importance of places and spaces to fans.

For example, for the first time in history, there was a period when every one of the six Disney theme parks in the world were closed. For dedicated visitors this instigated a sense of mourning and collective loss (much like those currently lamenting the loss of the Premier League football season or the closure of West End theatres may feel). Disney fans attempted to recreate rides and shows at home, to cook their favourite recipes from the parks, and to reminisce about their previous visits. As one online article noted, however, “a near-universal sentiment is that what people are missing isn’t a specific attraction, or their favorite snack, but an emotional connection that’s impossible to replicate.” For those who are fans of sites that are closed during the pandemic, attempts to recreate the experience of being there offer a way to maintain a sense of closeness and, also, to try to deal with any anxieties that may arise from the temporary loss of being able to visit these places.

For others, it is the lack of an opportunity to prepare for the closure of favourite sites, or the cancellation of a visit to a favourite tourist destination, that causes insecurity in the uncertain times of the pandemic. When we are aware of the shutting down of favourite places, we can allow ourselves time to come to terms with this and, if needed, to say ‘goodbye’. This is especially crucial when such places are integral to a sense of community or how we view ourselves; writing about the closure of the Doctor Who Experience in Cardiff Bay, Bethan Jones notes how important sites allow visitors and fans to form identities and memories which can then be threatened when such places shut down. The literal overnight closure of museums, venues, hotels and entire tourist hotspots engendered by the pandemic left us with little room for adjusting to a lack of access to favourite places for the unforeseeable future.

Many of the places forced to shut during lockdowns will survive; Disney has already reopened its Shanghai Park in China with strict social distancing measures. But some will not. The loss of places and sites that have been significant to people will continue to be felt for a long while yet. The ongoing challenges for those who work in the tourism industry, and those who feel meaningful connections to a range of sites and places, are as yet unknown. No matter what happens, the ‘new normal’ of travel and tourism looks set to be less affordable, less accessible, and less spontaneous than we are used to. But it seems certain that, for those sites that are able to recover from the impact of the pandemic and to reopen, their ardent fans and visitors will be waiting.

ANNOUNCING THE RECIPIENTS OF THE CEANGAL | CWLWM III COMMISSION AWARD