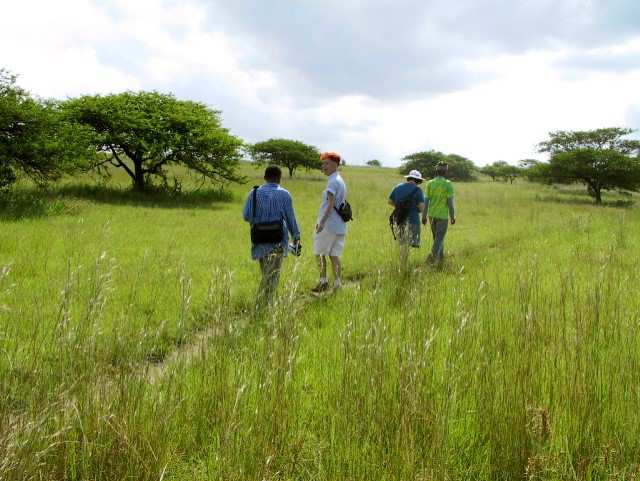 Dr Hilary Ramsden is Senior Lecturer in Drama and Performance at the University of South Wales. She uses her background in clowning and improvisation to interrupt everyday walks with a view to changing our perceptions and assumptions about the world around us.

Whether it’s making tea in a tea pot, sleeping on your side, shopping at Lidl or working standing up, we’re creatures of habit. Each of these activities encompasses a slick and practised routine of hundreds of tiny actions and gestures, thoughts and neural messages that take us from a state of horizontal unconsciousness to a vertical position of alert and complete awareness (on a good day). There is a certain pleasure in the certainty and skill with which we can carry out these most mundane tasks without being completely conscious of what we are doing because it is our body which has learnt and carries out the movements.

It’s the same with walking  - everyday walks within our neighbourhoods, (we might also call this y filltir sqwar , that Angela Graham refers to in a previous blog post) from home to the shops, work, school, mosque, church and pub are full of the daily twists and turns of our bodies, changes in pace and our encounters with people and places – most of which we generally absorb and process in an unconscious manner. (Until Recently)

In my arts practice of walking  I like to play with these habits, changing directions and improvising my way around in order to explore this ‘unconsciousness’; to try to bring more awareness to my walking; exploring how our habitual choreographies, if you like, and relationships to spaces and places and to others are articulated and developed, fragmented and re‐stitched. I do this by creating interruptions and interventions in everyday walks on my own, and (Until Recently) with others.  Interruptions such as following the first colour I see when I leave the house, walking really slowly (I find that really hard), talking to someone you encounter, standing on the corner for one minute (yes, that’s also really hard unless I have a child or a dog with me).

The biggest Unprecedented Interruption (since the Second World War) (they say)

Enter the (most Unprecedented) current interruption to all of our habits and familiarity, everyday moments, neighbourhood rhythms, - everything has been completely turned inside out, upside down, everything seemed strange and alienating. The pandemic has curtailed those walks in groups where we moved easily from one person to another, walking and talking in 2s and 3s, clumping together over a found object, listening and watching a fellow walker make observations to the group, following an idea or direction of another. During the first weeks of lockdown, walking alone was one of the few permitted activities that I could be sure I would do everyday – without endangering others – either those I passed outside or anyone in the tiny household I am currently living in consisting of my 93-year old mother and her full-time carer.  More than ever, an everyday walk was a means of re-finding the familiar, no longer seeking the surprise or the strange.

But the weeks have passed, my new situation has become routine, I have formed other habits. The walking, that was an escape from the household has also become an escape into the everyday and mundane, experiencing the little extraordinary moments and encounters within the environment as I walk the increasingly familiar pavements, public footpaths and bridleways in this small country town. And I am still finding ways to walk with others. Just as we now zoom for meetings and conferences, for end of week drinks, quizzes and bar mitzvahs, Whatsapp has become increasingly important as a means for me to walk with others.

I had begun using my phone to create text message walks about 15 years ago, when I was living in Detroit and wanted to connect with other friends and walking artivists further afield (I had a Motorola clamshell  - it was very snazzy).  Let’s go for a walk together [I would suggest] and you will need your cell phone. My idea was to get to know our neighbourhoods differently and to share thoughts, images and sounds after we’d walked. We would text each other instructions to carry out: Go out of your house and turn right, carry on for 100 yards then take the next turn left. Pick up something from the pavement in front of your right foot. Walk backwards for 1 minute. Stand on the next corner, close your eyes and listen. It was another way of experiencing the unfamiliar in the familiar – and surprising how many times an instruction would take me into a completely unknown part of my neighbourhood. It was a bit like using the first fax machine – miraculous to see the instructions appear then to do them at the same time as others but in a totally different global location. However, it was clunky to set up groups, some people didn’t get all the text instructions for one reason or another, there were frequent delays, and you needed a camera as well, and switching from camera to phone, from pointing and clicking to typing was time consuming. Then you had to wait until you got home to upload photos and sound files. But then…..the smartphone became mainstream and it changed everything.

I began to trial a variety of methods to document walks and drifts with USW students  - Storify was a great platform – to which we could send tweets and images – but it then disappeared to be replaced by Pearltrees which isn’t at all the same. Google photos is also a possibility for post-walk upload (or if you have enough data and bandwidth you can do it on the move) but each person needs to caption their photos separately from taking the photos.

I started using Whatsapp with a class of MA Drama students at USW a few years ago, when we took intentional walks as part of their Reflective Practice module. We created one Whatsapp group and 3 physical groups, with 4 – 5 people in each one. Starting from the Atrium foyer all together, each group was to walk for 40 minutes (20 minutes out and 20 back). Each group would take it in turns to send an instruction for everyone to carry out.  These ranged from: “Turn left and then cross over the road” to “Twirl your way along the street for 100 metres” to “Take a photo of a window on the third floor”. The trick was to leave each group enough time to complete the instructions and to give enough space to improvise if the instructions were impossible to carry out (if there were no buildings with windows, for example). We took photos as we went but discussion, conversations and laughter were predominant, so documentation was shared when we got back together. With such group walks the focus becomes more about being together in public space and noticing public responses and reactions to us on those walks  - just the sight of a group of people intentionally walking for even 150 metres together is unusual, it sends out different visual signals than a group of friends out together for a stroll. The usual choreography of the area, how people move around the spaces and each other, is interrupted and disturbed. Of course, executing arguably strange actions such as hopping on one foot then the other until you come to the next street is likely to elicit raised eyebrows and some rolled eyes. For drama students the everyday performativity was quite an eye-opener and post-walk discussions centred around feelings of (dis)comfort in ‘doing weird stuff’ on the street, to what degree they felt they were performing and how we use costume as a disguise and to boost confidence. Only in our post-walk discussions did we become more focused on what we had seen and heard.

After lockdown my walking session with current MA Drama students was still to come and I decided we would walk the Whatsapp walk, with each of us in our various lockdown locations, taking turns to offer instructions. One student was shielding and walked around her garden with her partner and two children, another walked around her flat, whilst the rest of us moved further afield. The walk lasted just over an hour and with a group of 13 individual walkers our Whatsapp thread was peppered not only with instructions coming thick and fast, photos and sound files, but with comments and side conversations. I’ve become very sensitive to the fragility of balance of power between the ‘artist’ and audience, and here, between lecturer and student, in what is a participatory and collaborative task. As individual walkers everyone needs to be in control, but I need not have worried. With Whatsapp I had way less control than I would have if I were physically facilitating a group walk. Everyone had a phone so the project was literally out of my hands for most of the time. It was amazing to see the amount of documentation (7 sides of A4), thoughts and energy that we generated within that one hour and it lifted our spirits in the early weeks of lockdown.

However, on initial reflection I didn’t feel I had been able to pay enough attention to the actual walk and my surroundings – I was too focussed on the instructions: taking a photo of something orange,  or of objects that weren’t obeying social distancing rules (in my case it was postal vans parked outside the sorting office, in another’s it was flower pots in a garden, for another water meter box covers on the pavement ) or I was trying to come up with a silly dance, finding the next run right or left. It wasn’t great for being at one with my environment…..yet, when I looked again through our conversations, the photographs and sound files, most of us had paid close attention at various points, picking out small, inconsequential objects, or noticing something about their body as they walked, also noticing incidental details in others’ locations from the shared photographs.

Interestingly, the side commentaries and tangential conversations which happen during a physical walk were all documented here. We have a wealth of material in the form of photographs, videos and audio files which we can revisit, explore and critique in addition to examining the flow and content of our conversations.  Reflective Practice indeed.

Everyday walks typify and embody the ‘taken-for-granted’ aspect of our daily habits and patterns with which we organise our movements within and through the lifeworld. We have (Unprecedented) opportunities for creating new habits and routines. Playfully interrupting these can make us more aware of our surroundings, increasing our powers of listening and observing, maybe getting us to question and be more curious about our lifeworld. Using Whatsapp whilst we walk together and apart provides another way to explore the possibilities.