In 1999 I published a book called ‘Certain Welsh Artists; Custodial Aesthetics in Contemporary Welsh Art’ (Seren) in which I attempted to formulate a defining term for artists who were culturally, politically and historically aware of their Welsh identity, and who sought ways of expressingthis identity through their artworks. More than anything, it is issues of ‘Identity’ that gave me purpose in writing it, but twenty years later, it is still an unresolved issue that needs further exploration. What constitutes a ‘Welsh’ artistremains a perennial question. Which identity? Whose Identity? The aim of the research is to expand on the initial thesis of ‘Custodial Aesthetics’ and explore how and if it remains relevant twenty years on. The main question is; ‘Is Custodial Aesthetics relevant in Wales?’. 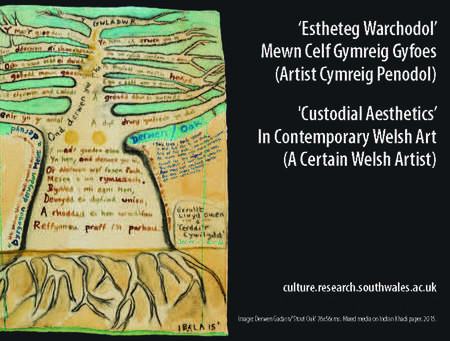 This PhD project is located within the broader interdisciplinary project ‘Welsh and Khasi Cultural Dialogues’, funded by The Leverhulme Trust. This creative arts research project investigates the shared cultural history of the people of Wales and the Khasi people of Northeast India. It uses Practice as Research (PaR) to construct a ‘cultural dialogue’ between Welsh and Indian scholar-practitioners, one that investigates and responds to our historical relationship. As an experienced musician writing in both Welsh and English, Gareth is collaborating with Khasi artists to create new music that explores our shared history and the continuing influence of the relationship on contemporary culture in both societies. The aim of the project is to investigate how shared cultural histories have shaped identities in the modern world. 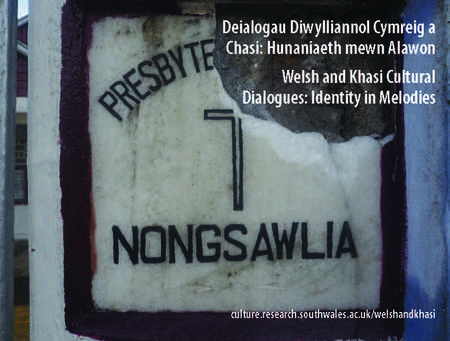 Talent and talent development are terms which have become ubiquitous across creative industries. These terms apply to a very broad cross section of the workforce and have become increasingly visible to researchers and policy makers over the past twenty years. This research examines screen industries’ talent development and creative labour in the context of Wales as a small nation. It focuses on the impact of policy developments for creative industries as a priority sector and key contributor to economic growth. Fundamentally, it considers access to Wales’ creative screen industries as well as the role of higher education in developing creative screen talent in Wales. The Welsh experience is set in context through comparison with another small nation in Europe, namely Denmark. The study involves a mixed-methods approach, including qualitative interviews, analysis of existing policy and industry documentation and statistics as well as desk-based and ethnographic research to detail the triangulated perspectives of industry, education and workforce. 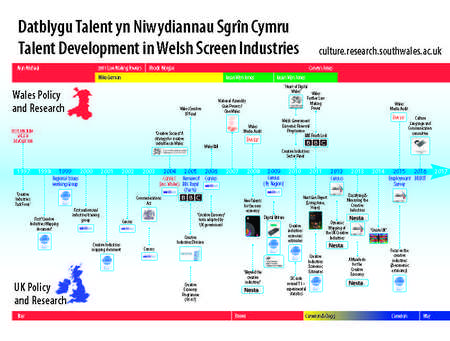 A report for the Welsh Music Foundation (Carr, 2011) identified that support for popular music from the Arts Council of Wales has room for improvement; and that participants in the Welsh industry give the impression they reach a plateau in their career, after which they either change career or move out of Wales. More recently, a music industry experts’ (e.g. John Rostron and Adam Walton) wishlist suggested that the prosperity of Welsh popular music requires improved engagement between Welsh Government and the popular music sector, and better support and training at grassroots level. Via a series of case studies, this research investigates how Welsh policymakers have valued popular music, and ultimately, how resulting initiatives have impacted the careers of popular musicians in Wales. 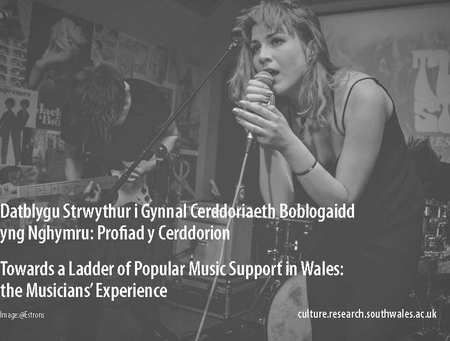 Though the term ‘cultural intermediary’ has been used for over 30 years, to describe professions responsible for the presentation and representation of goods and services, the diversity of professions this term covers and the range of contexts within which they work means much remains unknown about their actual professional practices. This includes what role cultural intermediaries play in selecting and creating national representatives, like celebrities, and how they contribute to debates on national identity and culture. Through examinations of promotional biographies, as produced by celebrity agents and managers, and newspaper articles about Welsh celebrities, produced by journalists, this research will uncover what characteristics of Welsh celebrity national identities intermediaries include in public Welsh celebrity images, what practices intermediaries use to form these images and how the Welshness of celebrities contributes to them. In answering these questions, this research will contribute to the studies of cultural intermediary practices, how intermediaries contribute to debates on national culture and identity, the study of Wales as a small nation, the formation of public celebrity images, the position of celebrities as national representatives and the visibility and representation of Wales within the media.